When Last We Left the Three Sorcerers and Their Entourages... 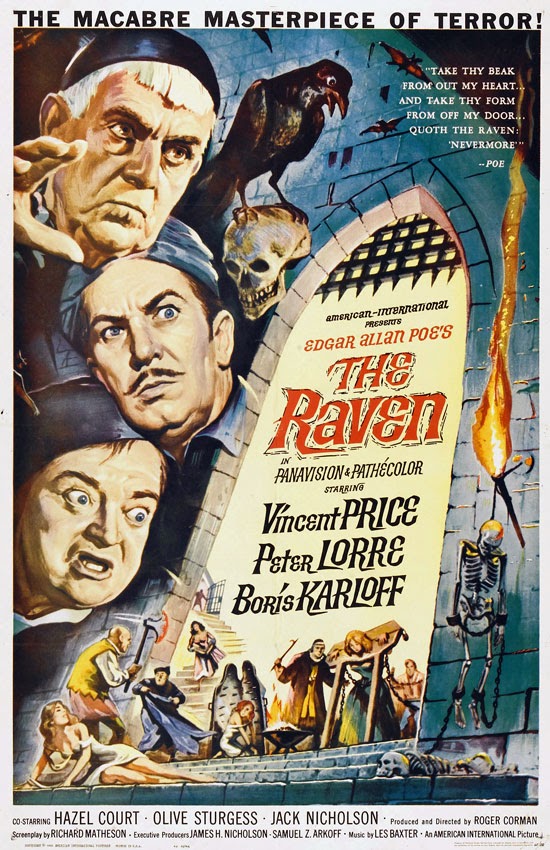 Dr Erasmus Craven is visited by a talking raven...who turns out to be his late father's friend, Dr Bedlo, cursed by evil sorcerer Dr Scarbus!
After being restored to human form and explaining what happened to him, Bedlo sees a picture of Craven's deceased wife, Lenore...and recognized her as a servant he had seen in Scarbus' castle!
Craven checks his wife's coffin in the family crypt and discovers it...empty!
After surviving an attack by his own servant, possessed by an outside source, Craven and his daughter along with Bedlo and his son head for Scarbus' castle!
Surviving an attempt to kill them en route, the group arrive at the crumbling castle...and are greeted warmly by Scarbus!
But betrayal seems to be the order of the day, as Bedlo is revealed to be conspiring with Scarbus to capture Craven and force him to reveal his sorcerous secrets!
Plus: the woman in the castle is Craven's very-much-alive wife, Lenore, who faked her death to be with her lover, Scarbus!
But, seeing Craven and his daughter, as well as his own son, endangered causes Bedlo to betray Scarbus...who turns him back into a raven! 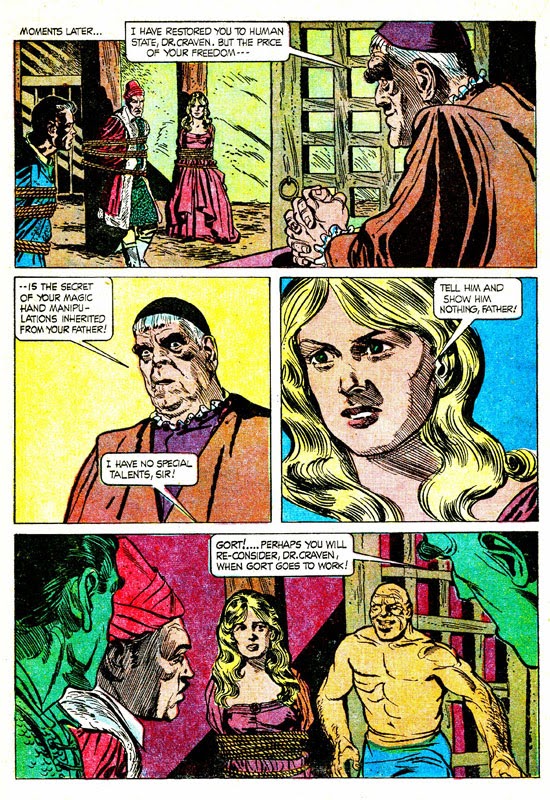 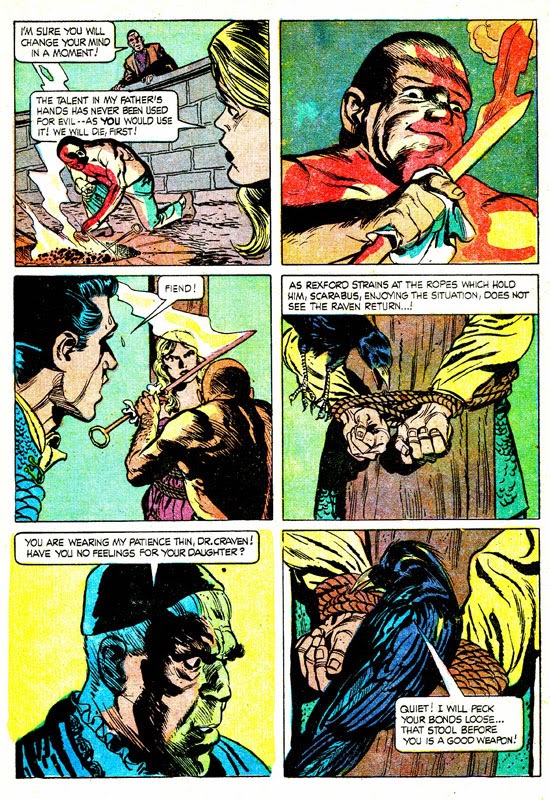 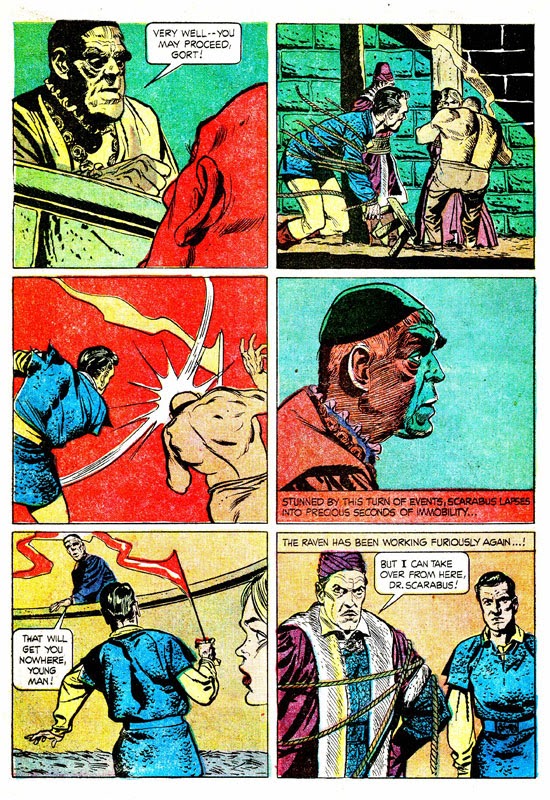 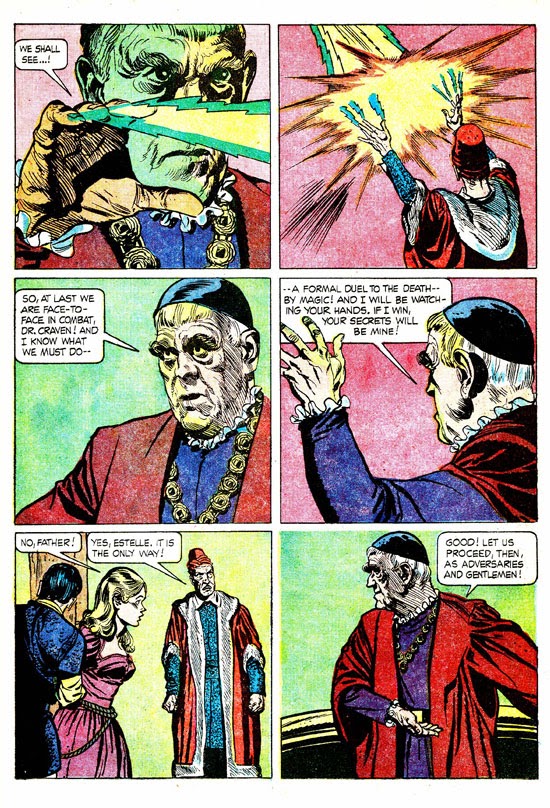 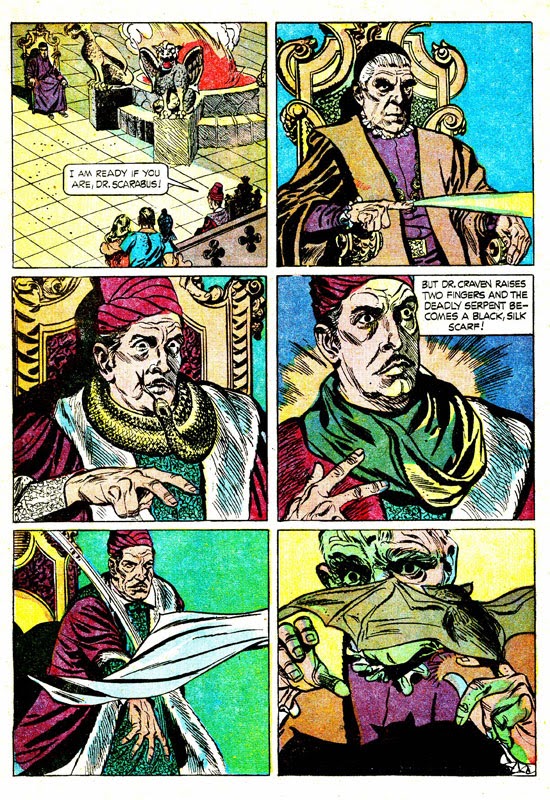 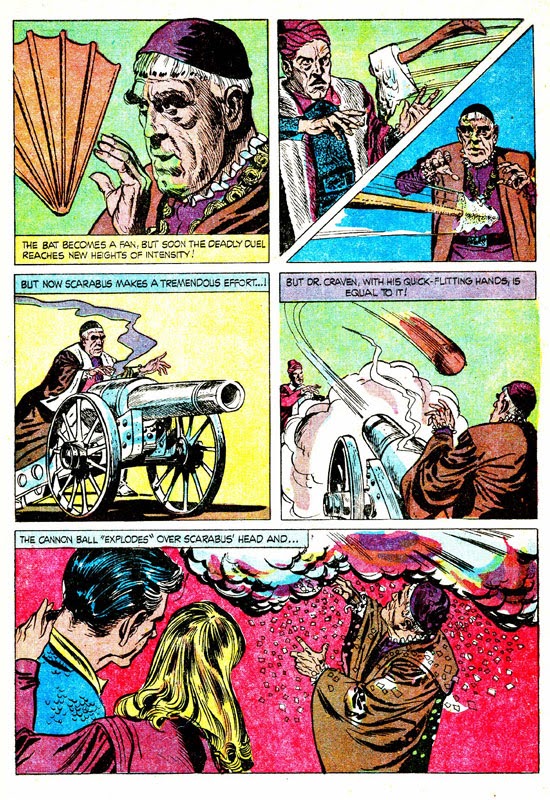 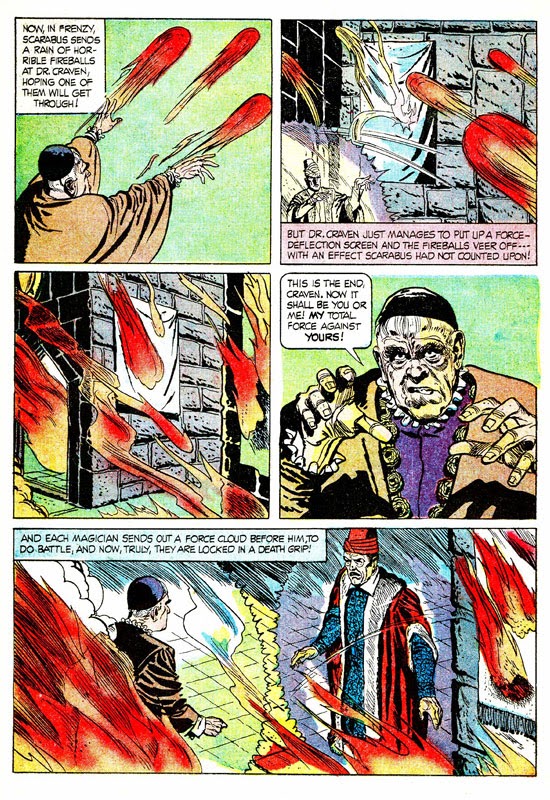 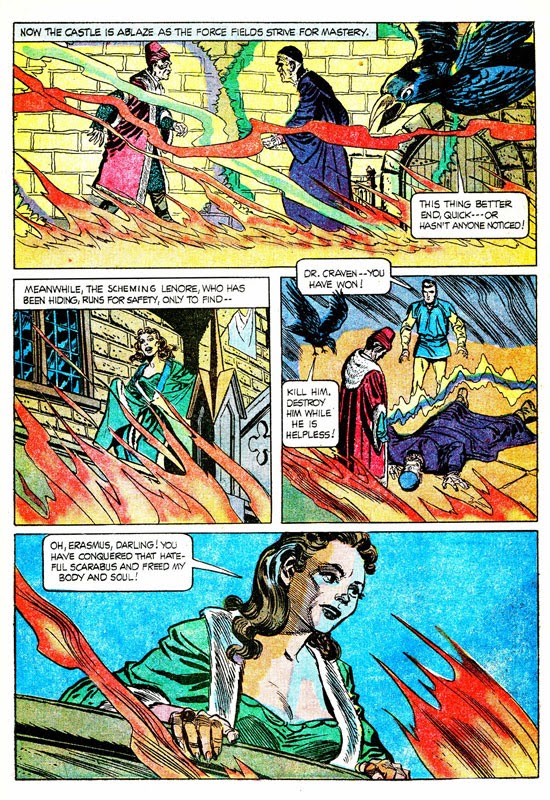 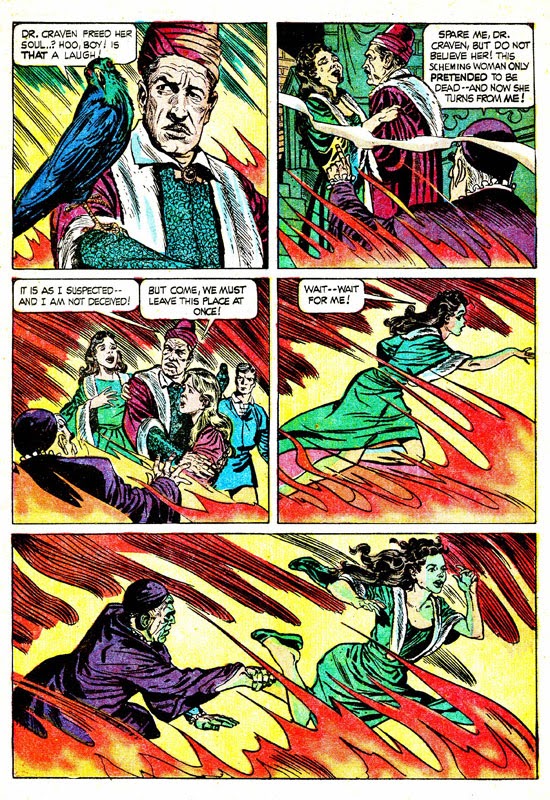 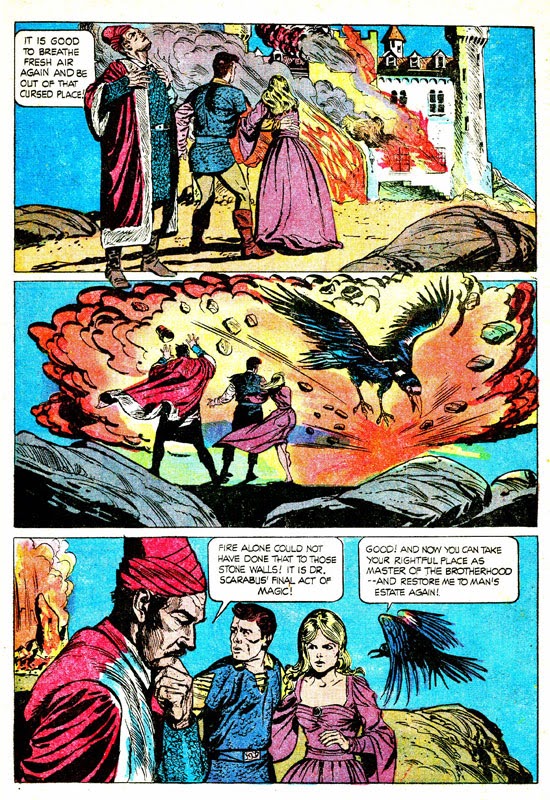 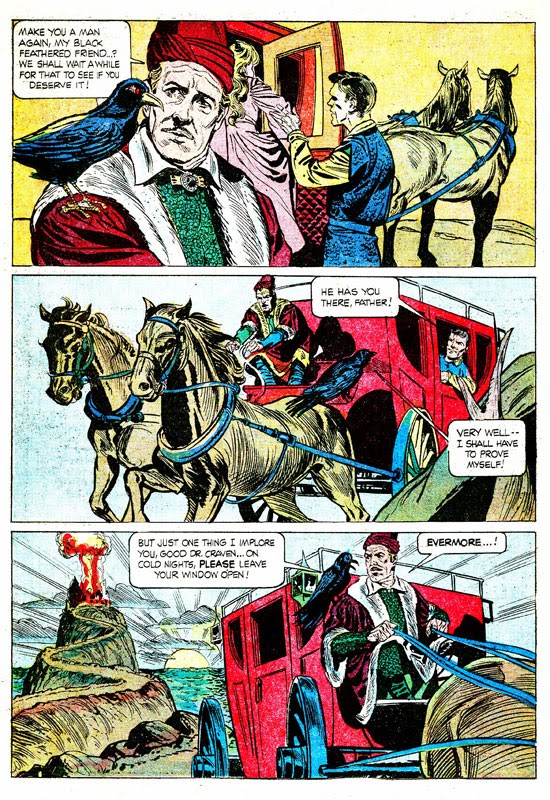 In the movie, Lenore and a now-powerless Scarbus survive!
The comic implies Scarbus uses what little power he has left to commit suicide and kill Lenore!
Trivia:
The movie was shot in just over two weeks, well ahead of schedule.
Since the sets weren't scheduled to be torn down for another two weeks, producer Roger Corman, whose frugality was legendary in Hollywood, hastily had a plot expanded to a shooting script and brought back both Boris Karloff and Jack Nicholson to star in it!
Karloff's scenes took only two days to film, and many believe the entire movie was shot in only two days!
The entire film took almost two weeks, just barely finishing before the sets had to be torn down so the next project could begin construction on the soundstage!
The resulting movie, The Terror, is noted for its' near-incoherent story.
It is a fun film, but put your brain "on hold" while watching it!
BTW, because it was shot on the same sets as The Raven, and is also a period piece, many consider The Terror to be part of the Corman "Poe Cycle" series of films.
It's not!
Next Week: We continue with another of AIP's period piece flicks starring Vincent Price which was marketed as part of the "Poe Cycle", but actually wasn't... 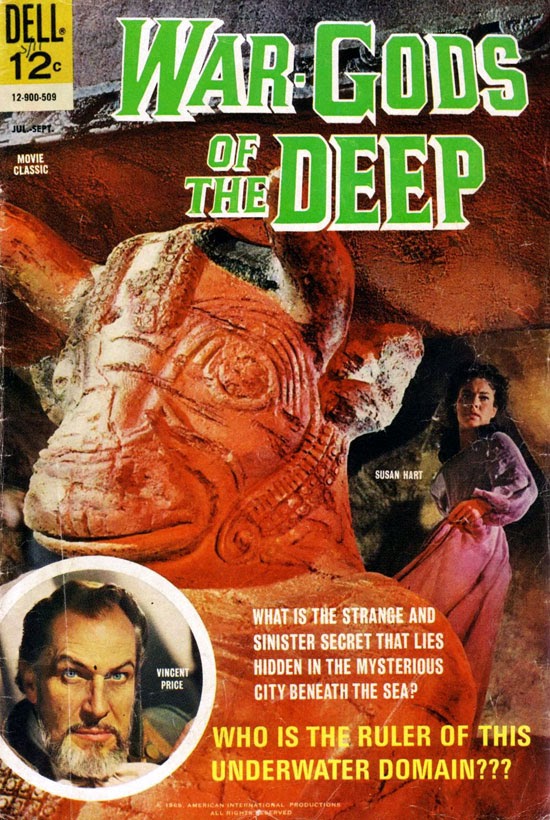 Be here next Monday to read the adaptation of a "steampunk before it was steampunk" flick!
BTW, if you want to see what other goodies we're doing for the Countdown to Halloween 2019 Blogathon...click HERE!
Please Support
Secret Sanctum of Captain Video
Visit Amazon and Order... 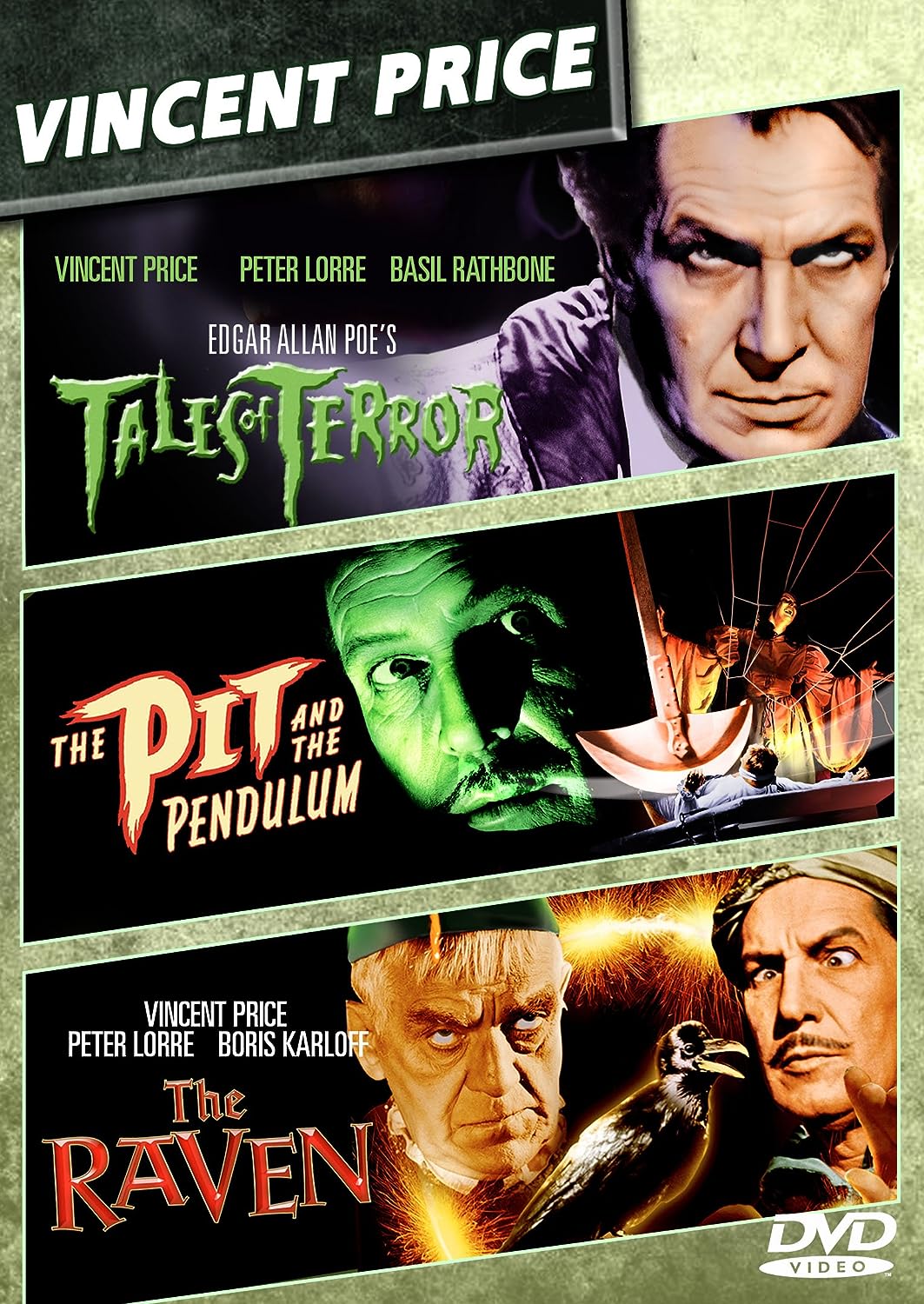 The Raven
(along with Pit and the Pendulum and Tales of Terror)
Posted by Britt Reid at 6:00 AM