The Most Dangerous Man on TV (Conclusion)

When Last We Left Our Villain... 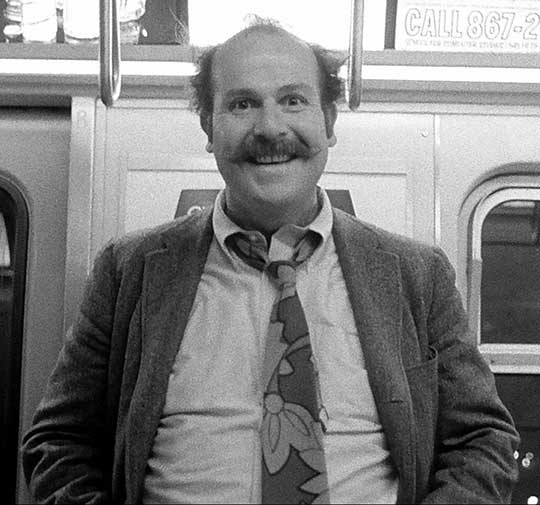 ...Roger C Carmel had already shown himself to be TV's most proficent practictioner of evil, with multiple appearances on various series, including a record-setting run as Classic Star Trek's only repeat antagonist!
But his greatest role had yet to be played!
And it would be in a historic setting...the first crossover between super-heroes from two different comics companies! 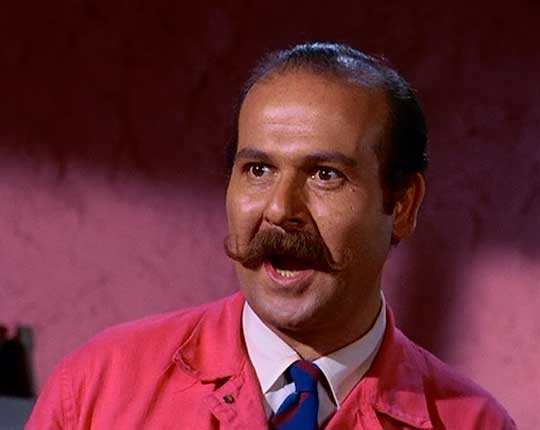 In the Batman second season two-parter "A Piece of the Action" / "Batman's Satisfaction",  Carmel played Colonel Gumm, a counterfeiter using his employer, Pinky Pinkston's stamp-printing facilities to produce forgeries of rare stamps he sells to collectors as the real thing!
It's also implied he had something to do with the demise of his employer's father, Pincus Pinkston, but that's never made clear.
When The Green Hornet (who is believed to be a criminal, though he's actually a hero) shows up demanding a cut of the counterfeiting operation, Gotham's own Caped Crusaders leap into action...to try to arrest The Green Hornet!
However, while tailing the Hornet, they discover Gumm is really the baddie!
When the Callous Counterfeiter appears to have turned the Hornet and his aide, Kato, into life-size stamps, Batman and Robin attack, but are caught like flies on flypaper as the first episode ends with them also about to be processed into oversize postage stamps!
As is the case with such cliffhangers, Batman and Robin break loose and free the Hornet and Kato who, or course, weren't turned into giant stamps!
Gumm and his men escape, and, without evidence, the Dynamic Duo let Kato and the Hornet walk.

Figuring out the Colonel's next move, both duos go to a major stamp exhibition where the Gumm and his gang (in disguise) are about to make off with oodles of rare stamps when both teams of crimefighters take them down while battling each other (since B&R think GH&K are criminals, remember?)! 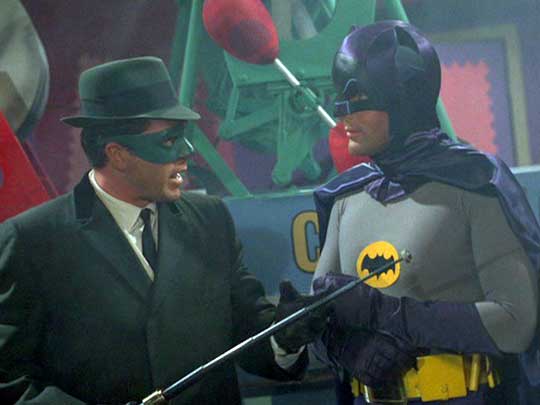 Roger plays Gumm as someone who really enjoys being evil, going almost as all-out wacky as Victor Buono did as King Tut!
He gloats and preens, all but devouring the scenery and spitting out toothpicks in an overacting tour-de-force!
But that's not all!
Carmel gets to play not only Gumm, but Gumm in three different disguises...all with different accents! 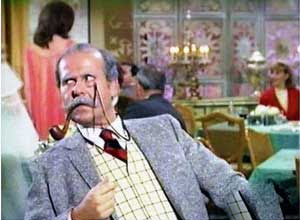 ...as an unnamed British gent who eavesdrops on Pinky Pinkston's lunch with Bruce (Batman) Wayne and Britt (Green Hornet) Reid who then pay a visit to the stamp shop of... 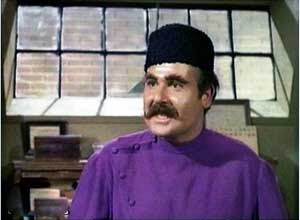 ...the Russian-accented "Boris Sevaroff" whom Bruce questions about counterfeit stamps.
When The Green Hornet invades Gumm's lair later that night, he reveals he knows Gumm is Sevaroff, leading the Colonel to conclude The Green Hornet is really...wait for it...Bruce Wayne! 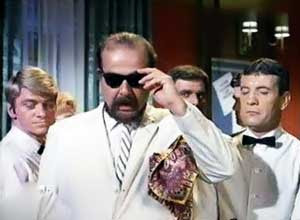 Finally, Gumm appears as "Senor Barbossa", an Argentinian stamp dealer, in order to steal rare stamps at the stamp exhibition.
Despite being a one-shot villain, Colonel Gumm was fondly-remembered by Bat-fans, and, a couple of years ago, when a comic based on the TV version of the Caped Crusader, Batman '66, was finally produced, he was brought back for a sequel to the TV series episodes...with a promotion from "Colonel" to "General Gumm"! 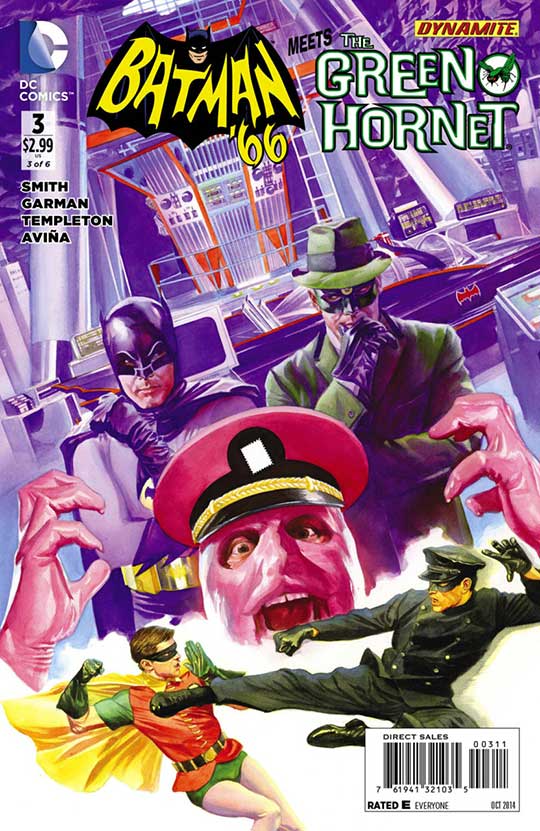 But there was a major problem!
The comic's publishers didn't have the rights to use Roger's likeness! 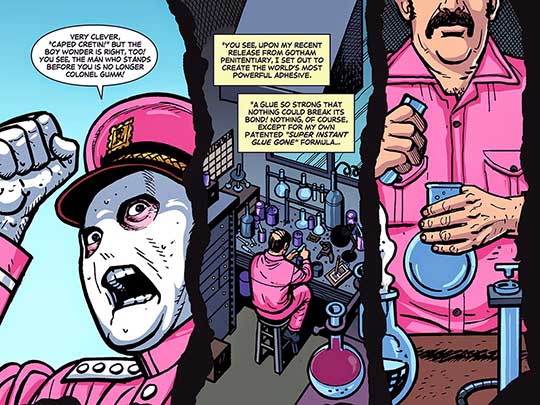 So, the story's writers concocted Gumm having an accident while trying to improve his glue, resulting in a sheet of it permanently affixed to his face!
Despite that drawback, the script captures the character's speech patterns perfectly, and you can "hear" Roger's voice in your head as you read the story!
Will Gumm return again?
Only time will tell!
At any rate, between Colonel Gumm and Harry Mudd,
Roger C Carmel's position as
The Most Dangerous Man on TV
is assured! 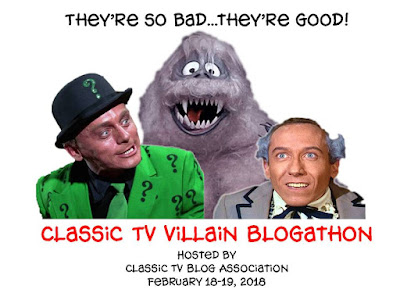 Click HERE to see some of the other amazing tales of the video baddies you love to hate!
Posted by Britt Reid at 6:09 PM 3 comments:

The Most Dangerous Man on TV!

He faced off against these two guys three times... 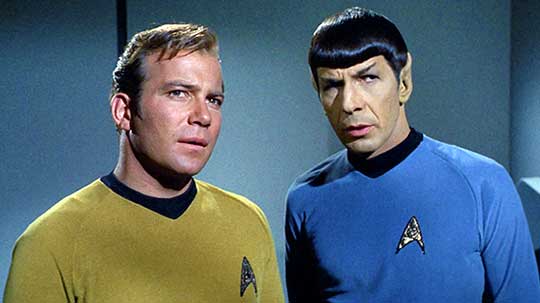 ...(more than any other antagonist in history)!
&
He forced the only time these two duos met... 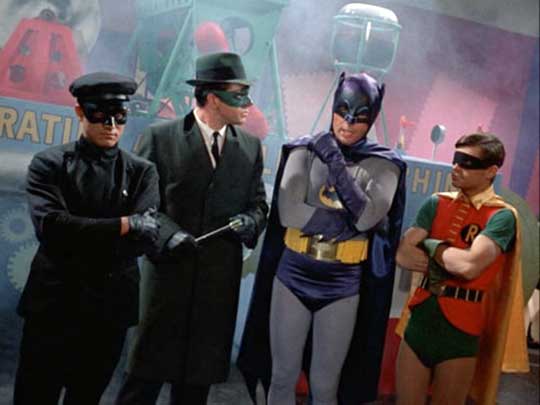 ...though they spent as much time fighting each other as they did dealing with his machinations!
Plus, he went up multiple times against other major heroes (though always in different roles), including Solo and Kuryakin: the Men from U.N.C.L.E., I Spy's Kelly and Robinson, and even Transformer Optimus Prime and his Autobots!
Who is the actor who played the Most Dangerous Man on TV? 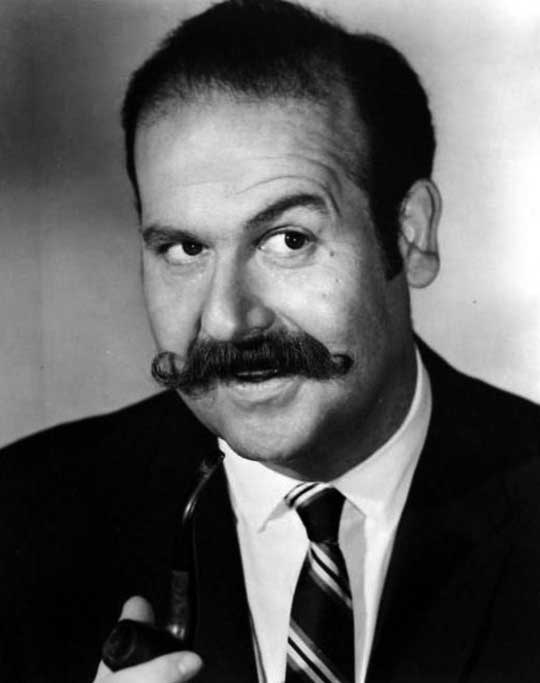 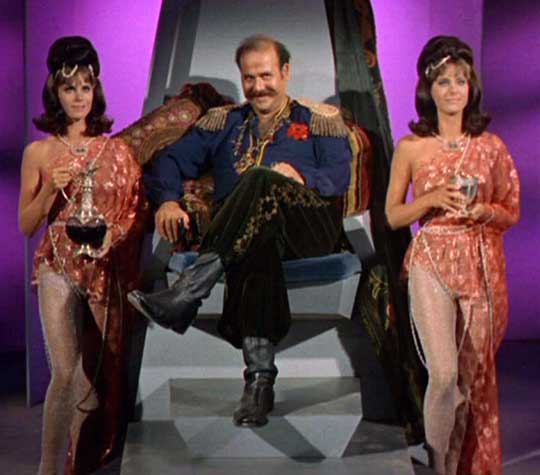 Roger made two appearances as Harry Mudd, two on Classic Star Trek and one on the Animated series (becoming the only non-Enterprise crew character to do so)
"Mudd's Women" 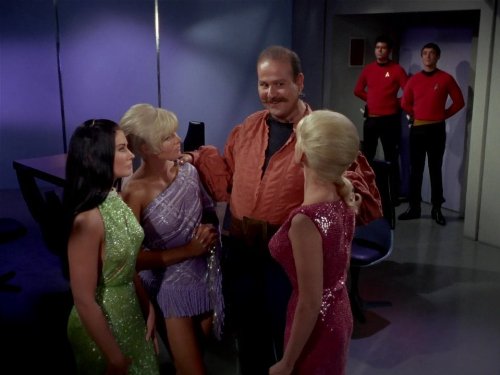 The Enterprise crew encounter charming rogue Leo Walsh transporting three women, ostensibly to become wives to miners on an isolated planetoid.
What they soon learn is that he's really a wanted con man, Harcourt Fenton Mudd!
Mudd utilizes the women to manipulate the miners into withholding needed dilithium from Kirk unless Harry is granted amnesty.
The plan almost succeeds, but one of the women rebels against Mudd and reveals Harry is using illegal drugs to enhance their femininity and attractiveness!
With the con revealed, the miners (who are now married to the ladies) give Kirk the dilithium and Mudd is taken prisoner!
Roger plays Harry as alternately charming and almost psychotically-menacing, not hesitating to allow the Enterprise and all aboard to be destroyed if it allows his escape! 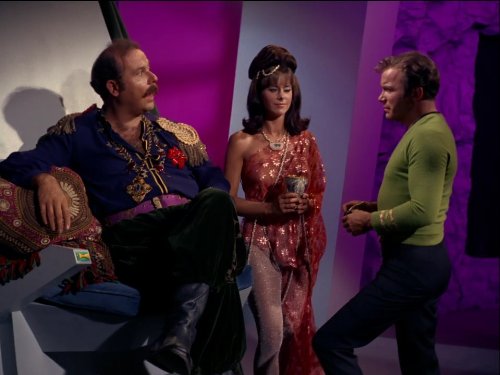 An android disguised as a Starfleet crewman sabotages the Enterprise and hijacks it to a remote planetoid where Kirk and company discover the android's commander is...Harry Mudd!
Harry explains he escaped from prison, but his ship, damaged by pursuers, crashed on this uncharted world.
A world populated by alien androids whose masters had died out centuries ago, so they willingly agreed to serve Mudd.
Unfortunately, his imagination was insufficent to keep up with their need for projects to do, so he hijacked a starship to get a whole crew of bright, intelligent people for the androids to serve...coincidentally, it was the Enterprise!
But, as most of Mudd's plans tend to do, this one goes awry when the androids reveal that, after observing Harry, they decide it would be best for the galaxy if they pacified humanity by removing it's desire to do anything by giving all humans whatever they wanted, in essence subjugating hamanity with kindness!
It's a much more humorous outing then the previous Mudd adventure, filled with witty repartee between Mudd and the crew, and, once Harry ends up in the same situation with the crew, the lot of them against the androids, he uses his incessant snarkiness for good instead of evil! 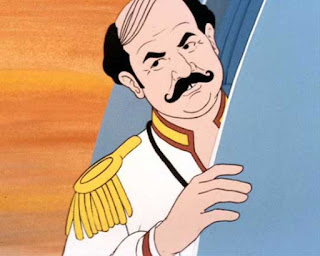 You'd think the least likely returning character to appear on the Saturday morning version of the series would be a con man who dealt in drugs and playing with people's sexual drives, yet here he is...dealing drugs and manipulating people's sex drives...but done with delicacy and good taste...sort of...
Having escaped from the androids. Harry is back to his thieving ways, promoting a phony aphrodisiac...which actually works!
Interestingly, it not only inspires romantic love between sexes, but enhances non-romantic affection between same-sex friends, resulting in perhaps the most controversial scene between Kirk and Spock in Star Trek history... 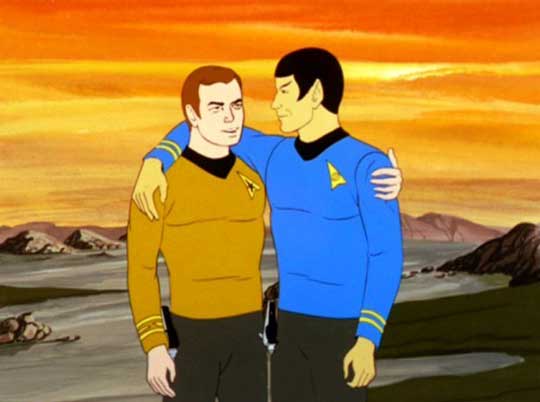 Yes, they're hugging!
Carmel's Harry Mudd is softened considerably here, no longer the callous SOB who would let the Enterprise (and crew) be destroyed, but he's as snarky and snide as ever, getting off a number of zingers before heading for incarceration...again!

But that wasn't the end of Mudd!
When DC Comics acquired the rights to Star Trek after Trek II: the Wrath of Khan came out, they created tales to fill the time frames between the movie adventures, often reviving TV series characters in new adventures.
So it was inevitable that you-know-who would return... 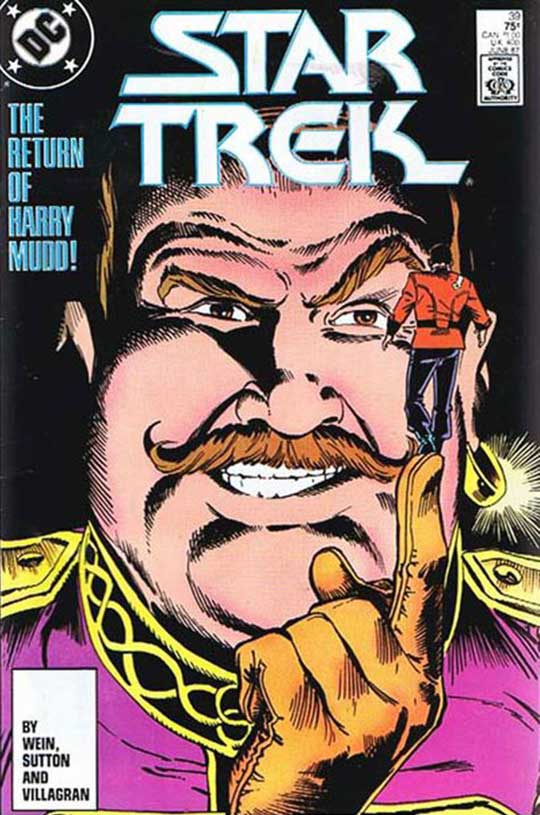 ...in a couple of pretty good multi-part tales! 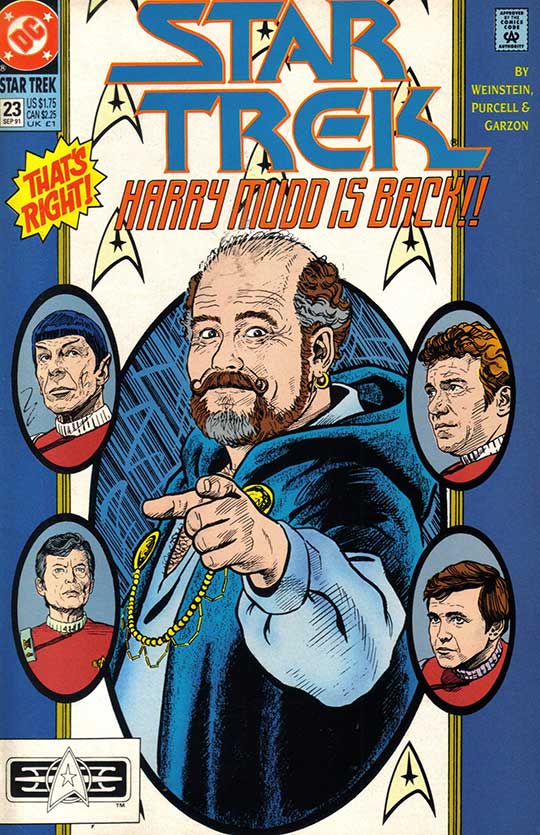 ...keeping him in sleazy, snarky character throughout!
And now, the prequel series Star Trek: Discovery has cast Rainn (The Office) Wilson as a younger, but still snarky, Harcourt Fenton Mudd...

...adapting some of the style and mannerisms of Roger C Carmel into his characterization!
But, fans, that's not the only legendary nemesis Caramel created!
Sadly, we've come to a point where we must break off our look into video history...until TOMORROW, when we'll bring you Roger's other immortal villain! 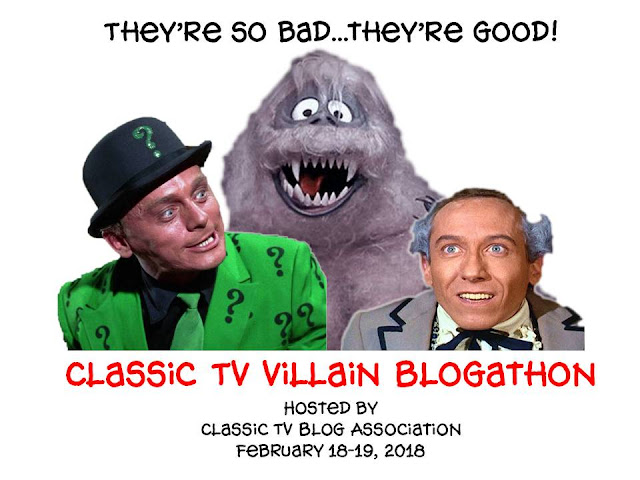 Click HERE to see some of the other amazing tales of the video baddies you love to hate!
Posted by Britt Reid at 8:01 PM 2 comments: