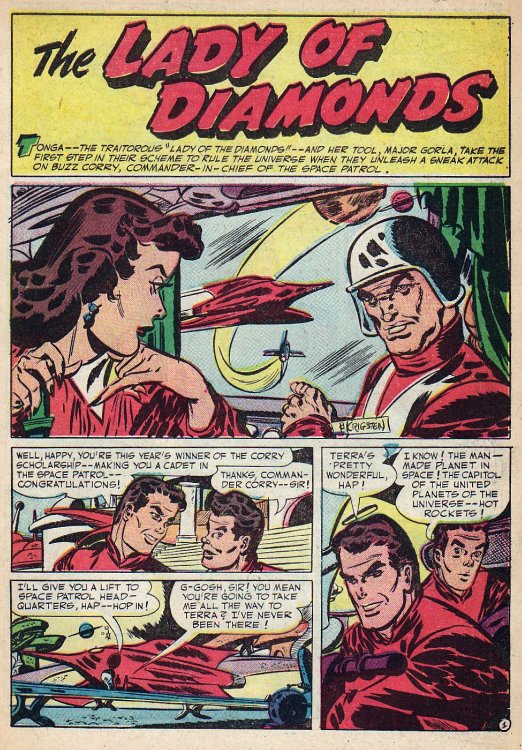 ...a saga of those who protect the 30th Century space-lanes in both the video and audio realms! 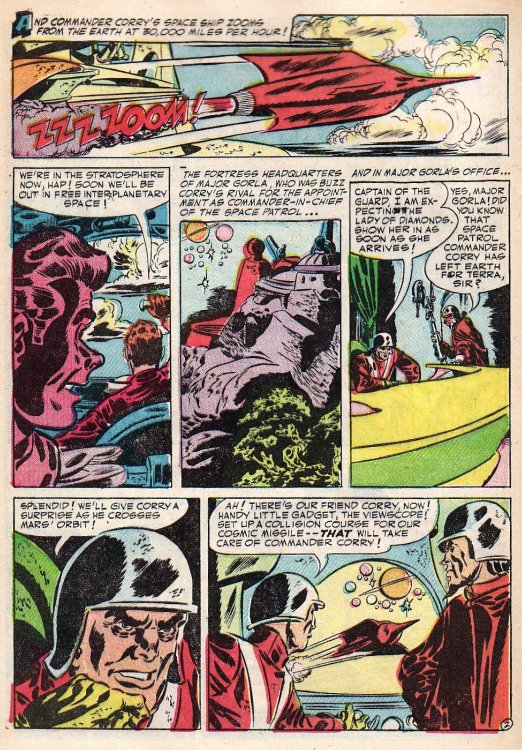 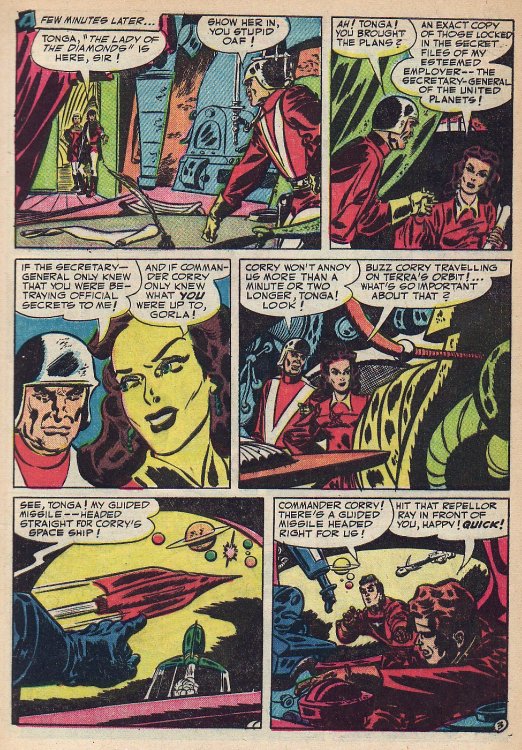 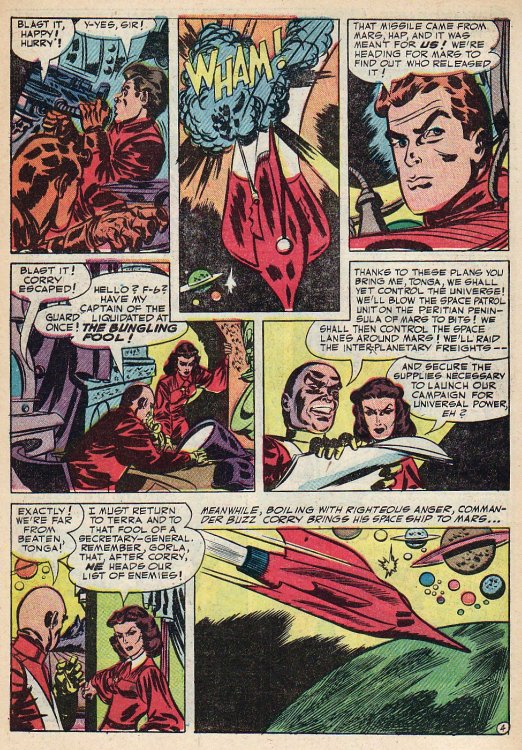 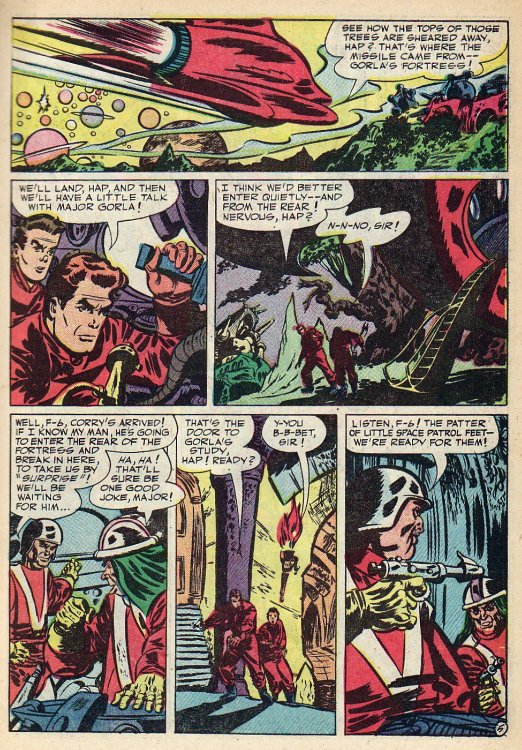 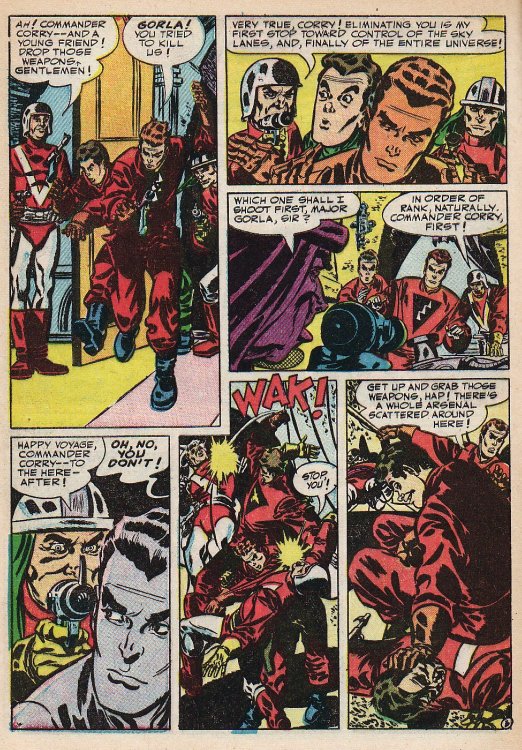 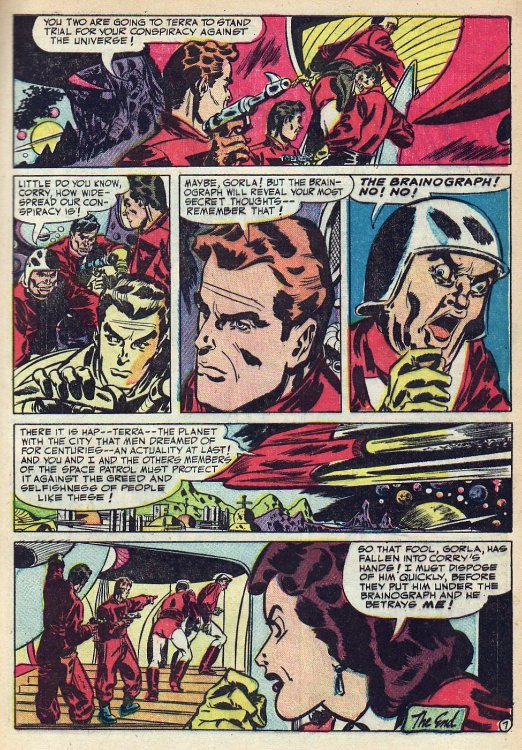 Tonga later reformed and ended up as the Assistant Security Chief for the entire Space Patrol organization!
Space Patrol ran Monday thru Friday on tv and semi-weekly on radio from 1950 to 1955, using the same performers for both media.
For a more extensive look at the tv and radio shows go HERE.
This comic book adaptation from Ziff-Davis Publishing ran for only two issues in 1952, and was written by Philip Evans (who did a lot of movie and tv tie-ins and co-created Drift Marlo, about a special investigator at Cape Kennedy), and illustrated by Bernie Krigstein (who also did SpaceBusters, a comic series about intergalactic Marines, before moving on to EC Comics, where he achieved his greatest fame).
The book ended not due to poor sales, but because Ziff-Davis left the comic book business during the "comics cause juvenile delinquency" controversy of the early 1950s, deciding to concentrate on publishing magazines instead, and still continuing to this day as seen HERE.

We have already seen...
Problems plague the upcoming Meta Probe mission and newly-appointed commander of MoonBase Alpha, John Koenig, discovers the "official" story to be a pack of lies with the "virus" ravaging the personnel actually being magnetic radiation from the nuclear waste pits on the far side of the Moon.
And there's another, unexpected, problem besides the deterioration of human brains and bodies...

The writer who adapted the screenplay is unknown, but the art is by Rich Buckler, Dick Giordano, Frank McLaughlin, and the Continuity Studios crew.
There were two lp albums from Power Records of Space: 1999 stories.
The first one featured three adaptations of Year One stories: "Breakaway", "Death's Other Dominion" and "Mission of the Darians".
Only "Breakaway" was adapted into separate comic book form with a 45 rpm record.
The second lp album, despite having Year Two cover photos (including Maya and Tony Verdeschi), consisted of two Year One adaptations; "Dragon's Domain" and  "End of Eternity" and two original tales; "Return to the Beginning" (adapted into comics form with a 45 rpm lp record) and "It Played So Softly on the Ear" which were based on the Year One format.

"Breakaway" is probably the single most-adapted tv show episode or movie in history!
In English alone, there's no less than three different comic book versions (all of which we've presented), plus a novelization, a short story that appeared in the first British Space:1999 Annual, as well as the story being adapted into EC Tubb's epic EarthFall novel which, after the incidents of "Breakaway", did an "alternate-universe" story covering decades, and finally returning two generations of Alphans to Earth!

Posted by Britt Reid at 1:01 AM No comments:

We previously presented the audio version of the pilot episode...

...but, since we've received several requests for the tale in standard page format, here it is!

Tomorrow: The Explosive Conclusion!
The writer who adapted the screenplay is unknown, but the art is by Rich Buckler, Dick Giordano, Frank McLaughlin, and the Continuity Studios crew.
Posted by Britt Reid at 1:01 AM No comments:

Captain's Library: VOYAGE TO THE BOTTOM OF THE SEA "Seaview's Ghost"

Voyage to the Bottom of the Sea comics were also published in England... 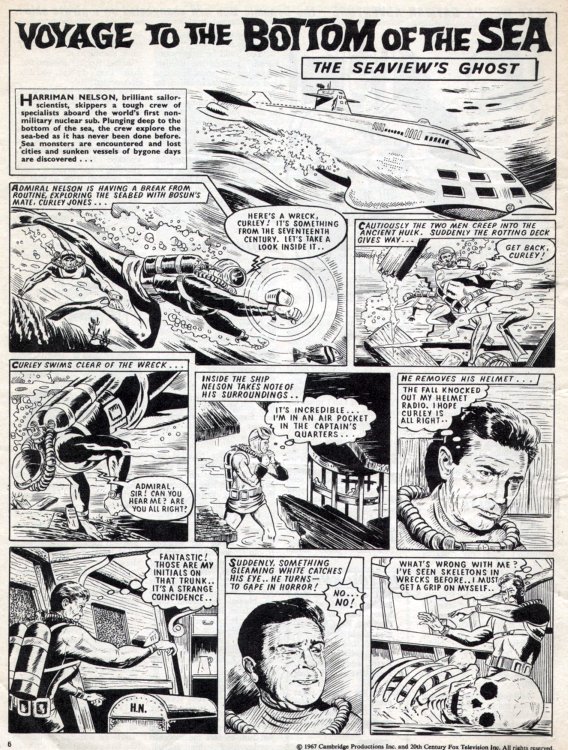 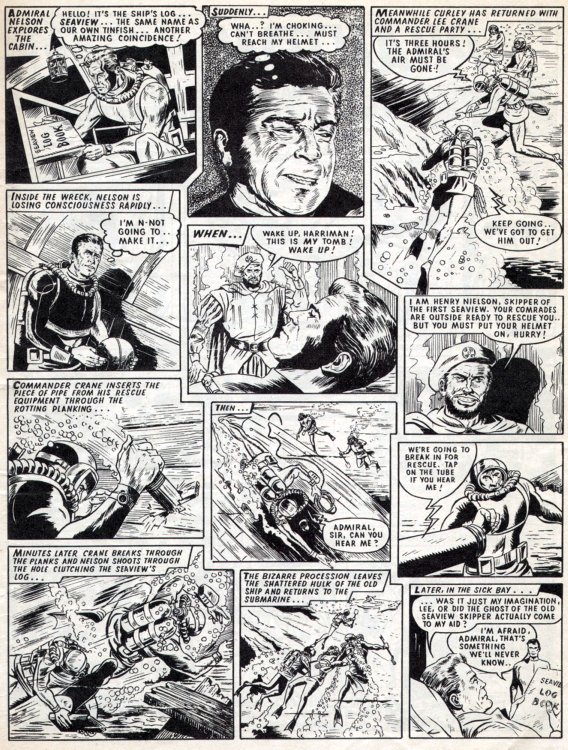 This particular strip is from the very first issue.
Other strips and illustrated text stories were based on Bonanza, Man from U.N.C.L.E., and Batman, among others.
Here's one of the few covers to spotlight Voyage...

The magazine had a short life-span running 88 issues plus a couple of annuals from 1967-1969 before merging with rival TV Century 21.
We'll be presenting more of the Voyage strips over the next few weeks...
Visit our

Classic Comix and Movie Collectibles Store
Posted by Britt Reid at 3:51 AM 1 comment: