While Bruce Lee's TV Kato is the best-known version to today's audience... 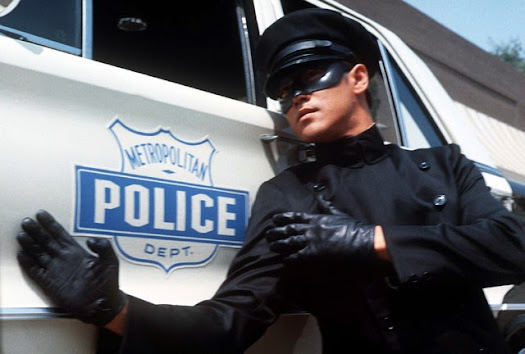 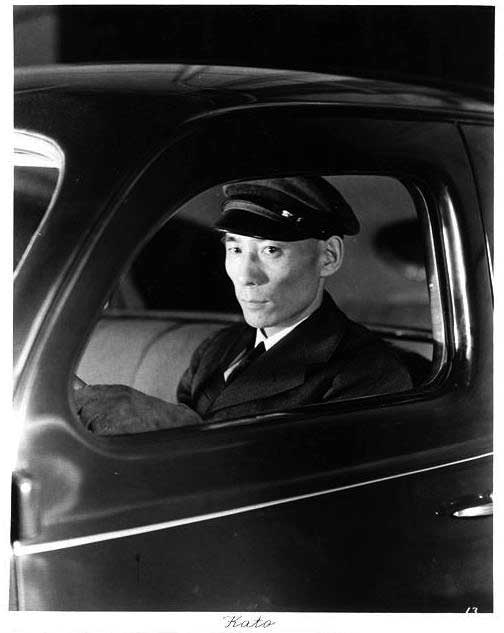 When the radio show debuted in 1936, the character, described in early episodes as Britt Reid's "Japanese valet", which became "Fillipino valet" in 1938, long before Pearl Harbor.
Japanese-American Tokutaro Hayashi/Raymond Toyo (above) initially played the character until 1942, when he, for all intents and purposes, disappeared.
There are rumors he was sent (as were many other Japanese-Americans) to an internment camp, but no conclusive answer has ever been found.
In an audio version of "white guy playing Asian", he was followed by Rollon Parker, Michael Tolan, and Paul Carnagie. 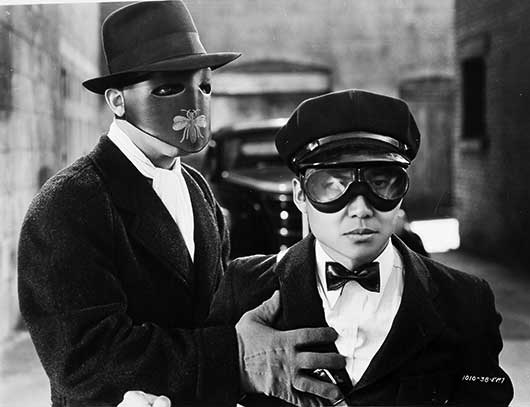 When The Green Hornet came to the big screen in movie serials in 1940 and 1941, Chinese-American Keye Luke handled the role, which was now defined as Britt's "Korean valet"! 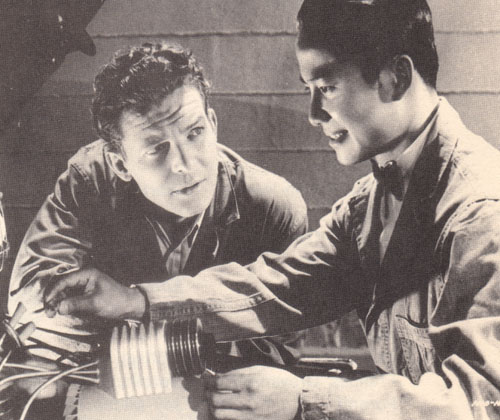 Kato, as portrayed in both the serials and radio show, was the technical genius behind the high-powered auto, the Black Beauty, as well as the developer of the Hornet's main weapon, a gas gun, and the knockout gas it used.
He even designs the Hornet's mask and insignia!
(It's never explained on the TV series who created the car, weaponry, and mask.)
The radio/movie knew some judo and karate, but usually acted as backup to the Hornet, who tended to go into situations alone and would then have to be rescued from whatever deathtrap the villains had ensnared him in.
Kato would also use the gas gun or gas grenades.
(Unlike the TV series where Kato would enter and leave first and silently lurk around the Hornet, keeping watch on their opponents, as well as kicking multiple butts with gung fu when required.
And TV's Kato never used the Hornet's gas gun, but did use the Hornet Sting sonic weapon only once, to blast a door open.)
Depending on the situation, the serial and radio Hornet and Kato both drive the Black Beauty.
(In the TV series the Hornet never got behind the wheel, though he did operate the Black Beauty by remote control in one episode!)
On radio and in the movies, there were references to Britt saving Kato's life several years earlier, as well as an adventure where they encountered a rare and lethal giant green hornet, which gave the hero the name of his alter-ego.
(On TV there was no explanation as to how or why Britt recruited Kato to be not just a valet/cook, but to work with him battling evil.)
We hope you've enjoyed our look at Kato, one of the best-known, yet least-known, sidekicks in popular media!
Have a look at the other participants in...

Please check out the rest of the astounding entries by clicking HERE.
Posted by Britt Reid at 11:45 PM No comments:

Bruce Lee: the Man Who Was Kato 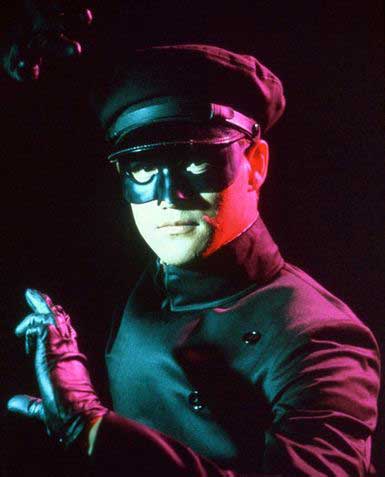 ...Bruce Lee's performance as Kato was, to many, the defining aspect of the Green Hornet TV series.
But who was the "man behind the mask", and how did he end up in the role? 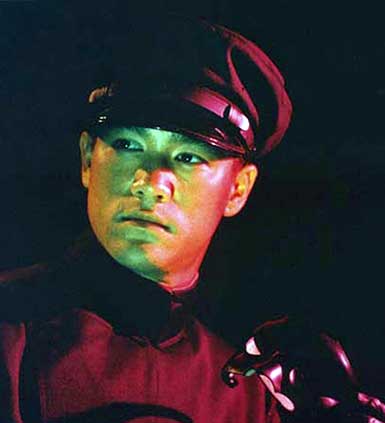 As for who he was, there's a well-done overall bio (with clips) HERE.
As for how he got the Green Hornet gig...
In early 1966, the country went Bat-mad with the mid-season debut of the Adam West-starring tv series... 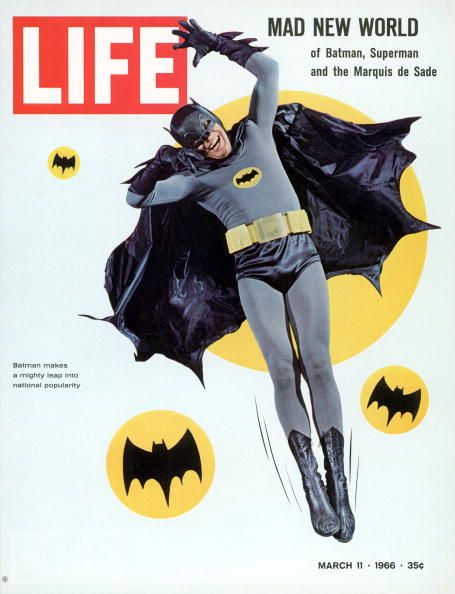 All three networks jumped on the bandwagon, soliciting ideas for new comic book/strip-themed shows for September 1966.
Batman's producer, William Dozier, came up with several ideas, including... 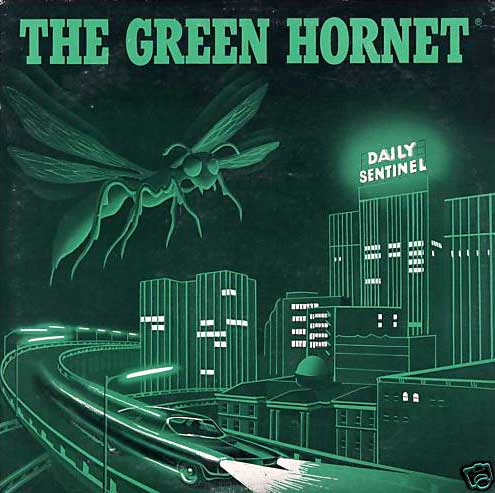 ...whose radio show reruns were getting great ratings with college-age audiences and lp record albums (like the one above) were flying out of stores.
(Note: there was no Green Hornet comic book at that point.)
The character's creator insisted that, unlike Batman, the show be played "straight" rather than "campy", a point Dozier emphasized in his "pitch" to the ABC execs...


Dozier's first (and only) choice for Kato was a guy he had auditioned in 1965 for the role of Number One Son in a Charlie Chan TV pilot that never got off the ground.

Bruce Lee - 'Original Screen Test' (1965... by cosmo2161
Here's a condensed version of how things went after that from Marvel's Deadly Hands of Kung Fu #28 (1976), written by Martin Sands, penciled by Joe Staton and inked by Tony DeZuniga's studio... 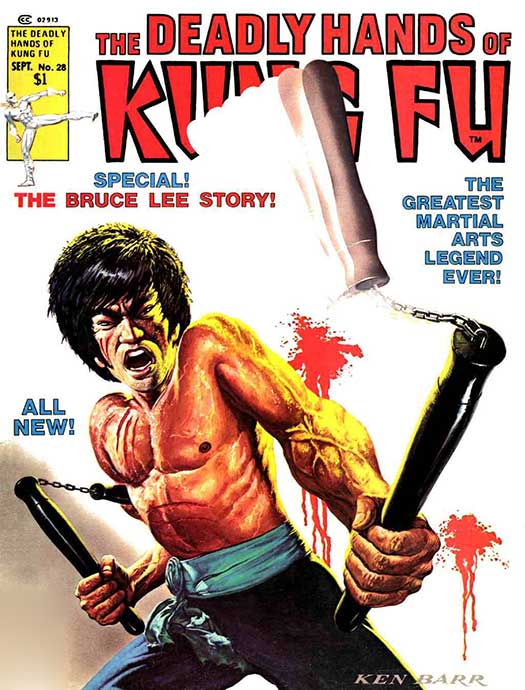 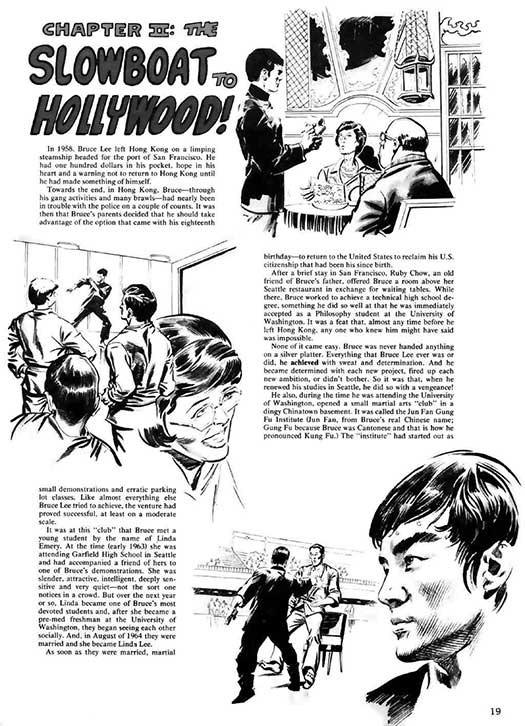 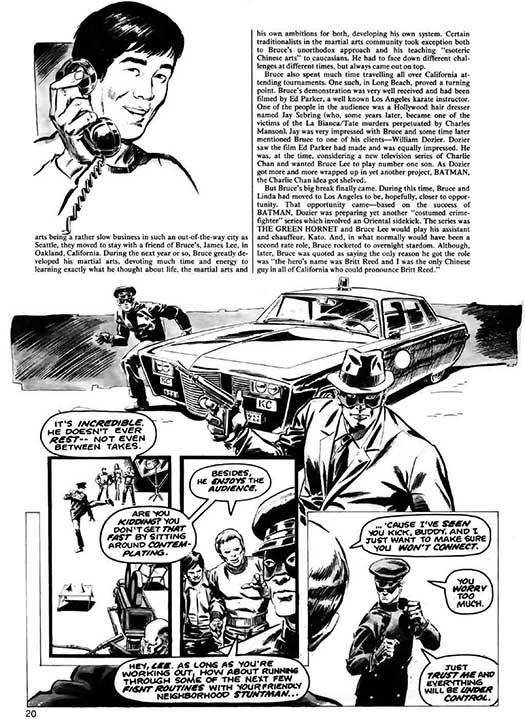 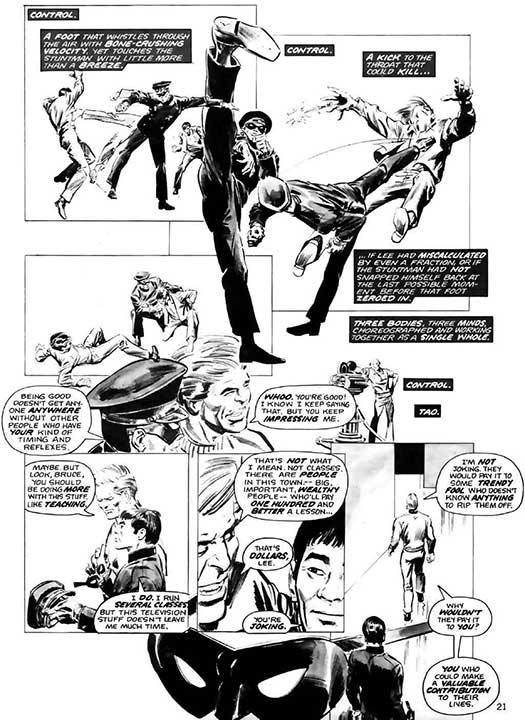 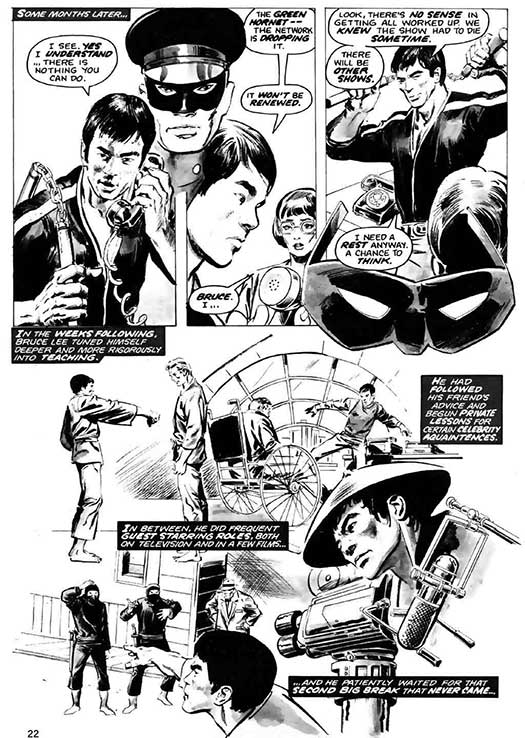 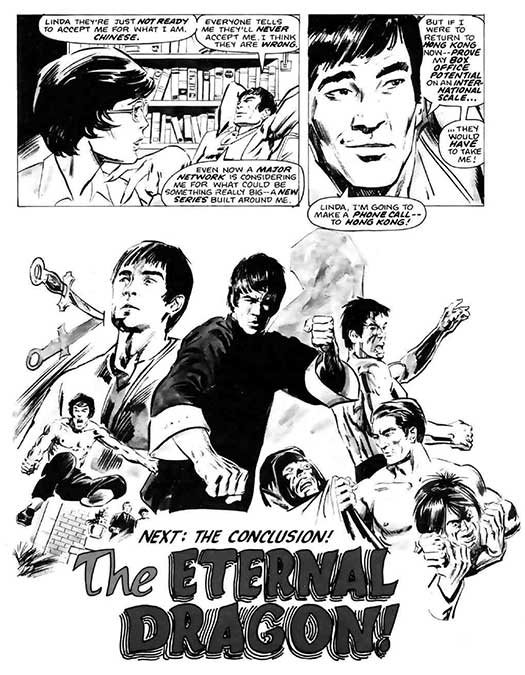 The 1993 biopic Dragon: the Bruce Lee Story showed an apocryphal scene showing how Bruce would "add" to the stuntwork for a scene.
BTW, the Director character is played by Van Williams, the TV Green Hornet!
Lee went to Hong Kong, immediately found work, and, from his first film, The Big Boss, onward, became a box-office sensation.
Due to that, The Green Hornet was a hit in reruns on Asian TV networks, which advertised it as The Kato Show.
American producers then cast him as the Asian member of a multi-racial cast of protaganists along with Jim Kelly and John Saxon in the kung-fu/spy mashup Enter the Dragon, which resulted in Bruce Lee becaming the genre's first superstar in America and Europe.
Sadly, Lee died under mysterious circumstances shortly before Dragon hit the theatres.
All his Hong Kong films were dubbed and released to theatres, doing extremely well at the box office.
Desperate for new Lee-based product, producer Laurence Joachim licensed the theatrical rights to the Green Hornet and composited episodes together to make two feature films, The Green Hornet... 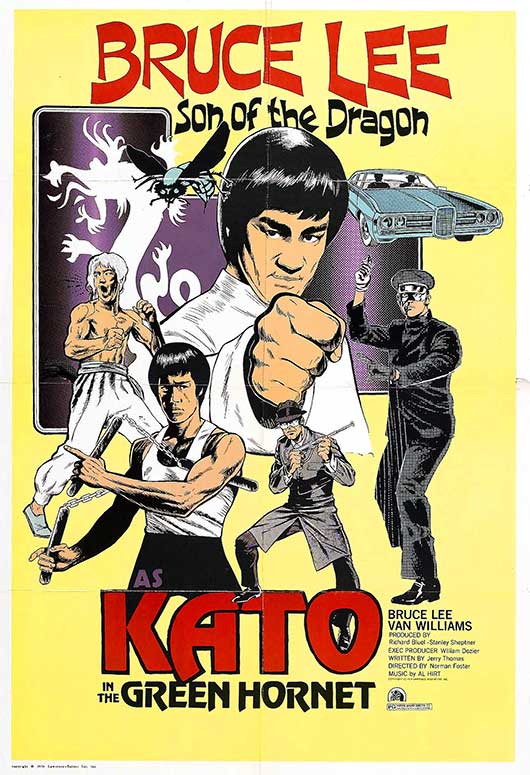 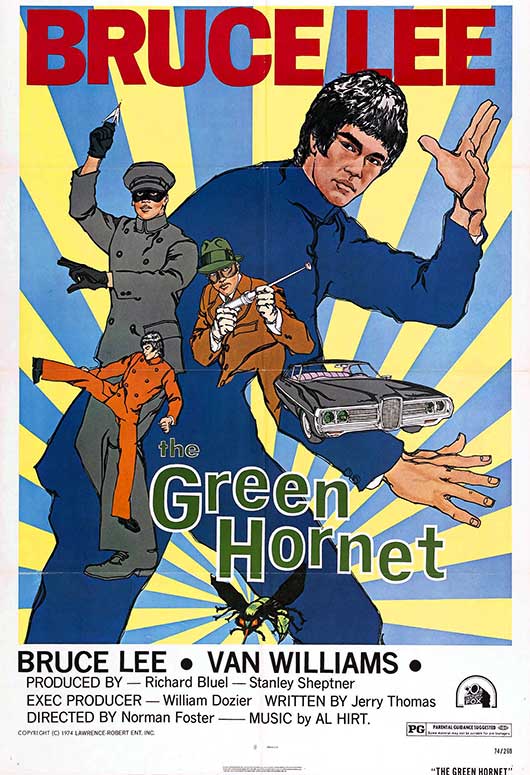 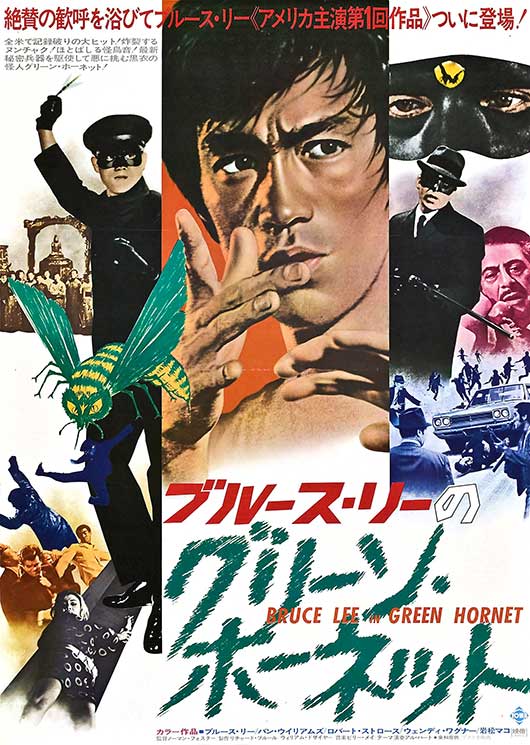 ...and Fury of the Dragon. both of which gave Lee top billing! 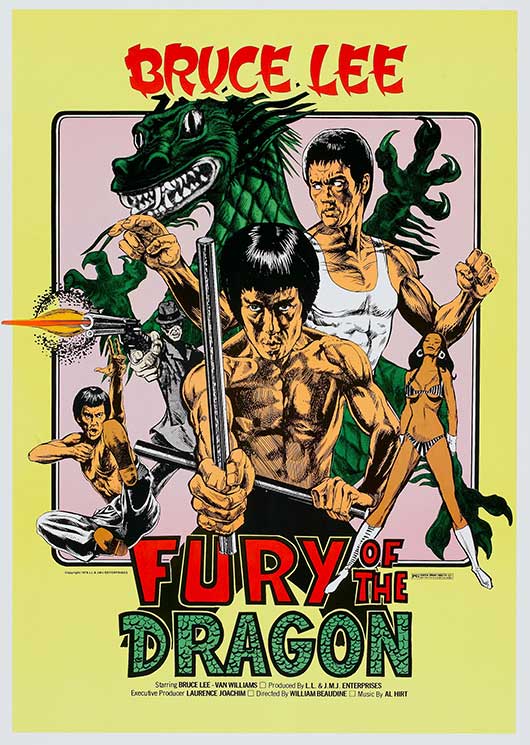 Here's the trailers for both of them.

Enjoy!
Be here tomorrow, when we take a look at how Bruce Lee's Kato differed from the previous movie and radio incarnations.
The answers will surprise you!

And have a look at the other participants in...

Please check out the rest of the astounding entries by clicking HERE.
Posted by Britt Reid at 11:16 AM 3 comments:

KATO: The Man Who Put the "Kick" into SideKick!

...the impression made by martial arts legend Bruce Lee in the role that introduced him to American audiences, Kato! 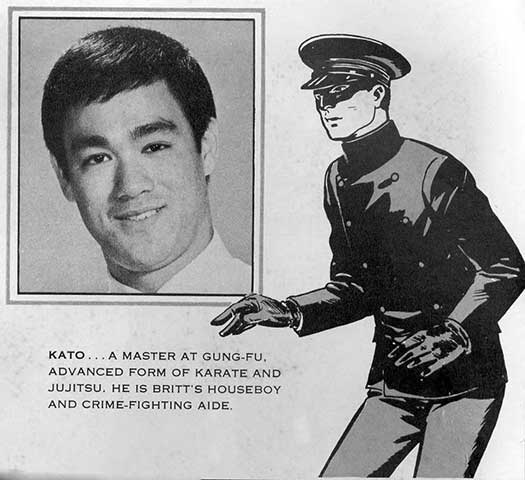 As his "crime-fighting aide", Kato handles the Black Beauty (with an arsenal of high-tech weapons) and protects the Green Hornet from any danger with almost superhuman reflexes and mastery of the then little-known martial art "gung fu", now called "kung fu".
He's the Hornet's soft-spoken "enforcer", and it's apparent that most criminals are even more afraid of him than his boss.
At home, he's Reid's "houseboy", a combination of butler, cook, valet, chauffeur, and handyman.
Interestingly, they're close friends who trust each other with their lives in costume, but maintain the social distance that employer and employee would have when in their civilian roles.
The TV series begins "mid-stream", with the Hornet and Kato already operating as pseudo-criminals in their unnamed home city.
There's never an explanation as to why Kato and Reid fight crime, how Reid got his employee to join in his crusade against evil, or even if Kato gets overtime or hazard pay for his masked work.
He doesn't have a code-name like "Wasp" or "Mosquito". Criminals and police refer to him as "the Hornet's man", "the chauffeur", or "the Hornet's companion".
But Kato brings an amazing level of both enthusiasm and caution into backing up the Hornet.
Whenever entering a room, he tends to go first, clearing the way for the Hornet.
Leaving a room, he keeps himself between anyone else and the Hornet, never turning his back on the others until both he and his boss are out the door.
He'll do anything, including facing a Sherman tank armed only with a tear-gas grenade or taking on an entire army of martial-arts assassins!
But nowhere in the series is Kato spotlighted as in the episode "The Preying Mantis", involving a Chinese criminal group called a "Tong", despite having very little dialogue.
Watch how Kato,without saying a word, dominates the scenes he's in with Low Sing, the head of the Tong who's working with gangster Duke Slate, using body language and facial expression to interact with Low Sing while the Hornet and Slate discuss terms for a ransom, and later, during the showdown where Low Sing and Kato battle one-on-one.
Be here tomorrow as we go into Bruce Lee, the man who was Kato!
And have a look at the other participants in...

Please check out the rest of the astounding entries by clicking HERE.
Posted by Britt Reid at 8:38 PM 3 comments: