Here's something a little different...a prose story with illustrations... 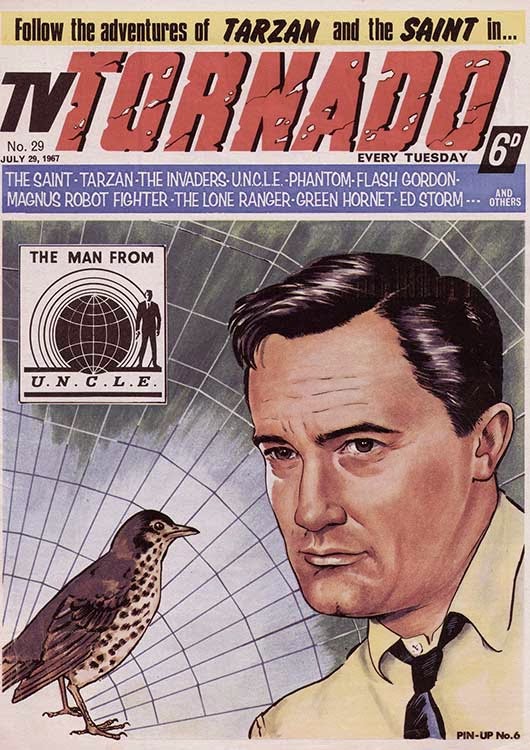 ...from the British weekly TV Tornado., which ran strips and stories based on other British and American tv series, as well as a couple of features not based on video shows! 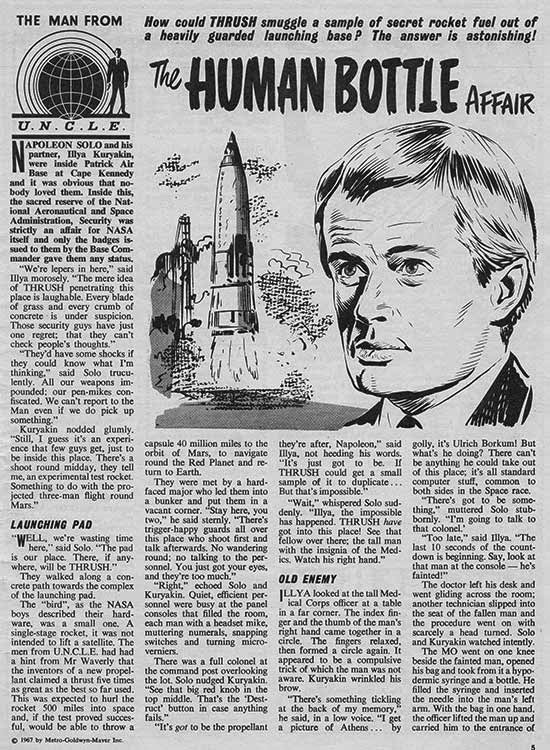 TV Tornado ran U.N.C.L.E. text stories like this, but no strips, like The Saint feature we ran last week.
However, in the hardcover annuals that TV Tornado (like other weekly magazines produced), there were U.N.C.L.E. strips...and they were in color (or colour, as the British spell it)!
Posted by Britt Reid at 6:01 PM 1 comment:

The Spies Who Love ME-Week 5

Here's some facts and trivia about the eps in Sunday's...

10pm (ET) Man from U.N.C.L.E.
"The Deadly Game Affair" has a mad scientist ready to revive Adolph Hitler is he can find someone with the right blood type.
Alexander Scourby, a popular tv/radio narrator who also played authority figures (both good and evil) on tv handles the Nazi scientist role with scenery-chewing relish.
Janine Gray, whose character, Angelique, was meant to be an ongoing villainess with a lust for Napoleon Solo, had appeared on numerous British shows like The Saint, Danger Man (aka Secret Agent), and The Avengers. She was also in the pilot for Get Smart.

11pm (ET) Mission: Impossible
"The Question" is one of the few foreign espionage episodes in the final season.
Defector Gary Lockwood is a familar face to genre fans, playing both the transformed Gary Mitchell in the Star Trek pilot "Where No Man Has Gone Before" as well as doomed astronaut Frank Poole in 2001: a Space Odyssey!
Lynda Day George, though listed in the credits, doesn't appear due to her pregnancy.
Elizabeth Ashley served as the IMF's femme fatale in her second time on the show. (Ironically, the first time, Ashley played a mobster's wife whom George's character, Casey, impersonated!)
Midnight (ET) Get Smart
"Maxwell Smart: Alias Jimmy Ballantine" features Tim Herbert as safecracker Jimmy Ballantine.
Herbert also played Killer Moth on the 1960s Batman tv series...in an episode the public never saw that was loosely-based on her first comic book appearance!
But you lucky ducks can see it HERE!

"Casablanca" gives Don Adams a chance to do his Humphrey Bogart imitation as well as featuring Gordon Jump as the Chief's aide, Hobson.

1am (ET) The Saint
"Island of Chance" shows a tuxedoed Roger Moore in an enviroment he'd become very familar with as James Bond, a high-stakes casino!
Be here on Sunday for a classic comic story based on one of these series!
Posted by Britt Reid at 9:58 AM No comments: