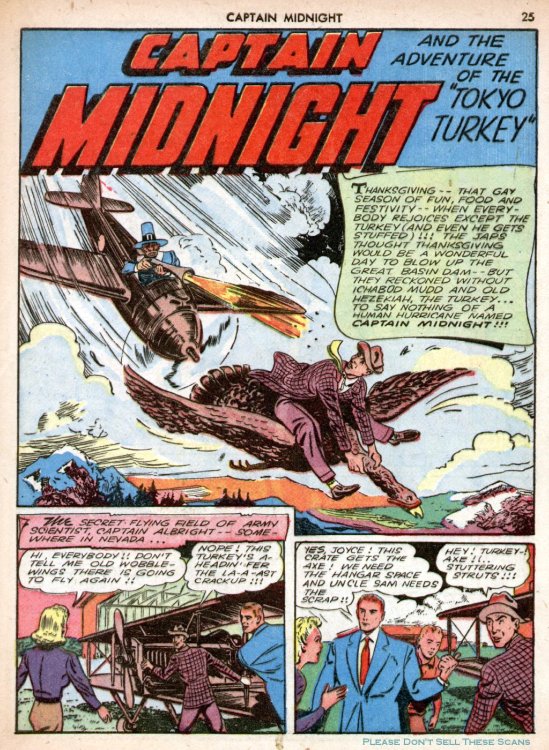 Unlike Christmas-themed stories, there are very few comics tales set on Thanksgiving. 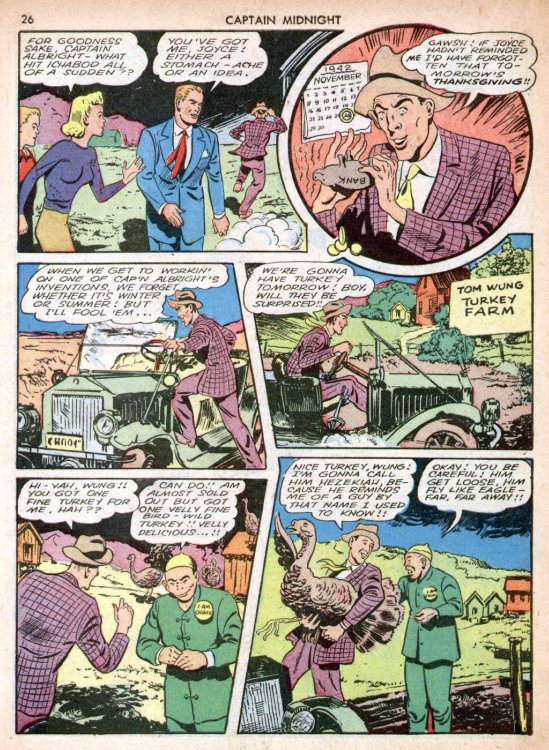 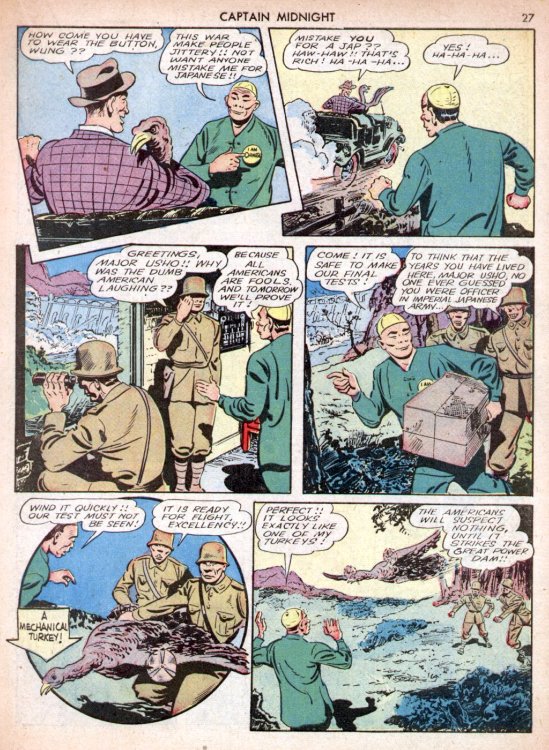 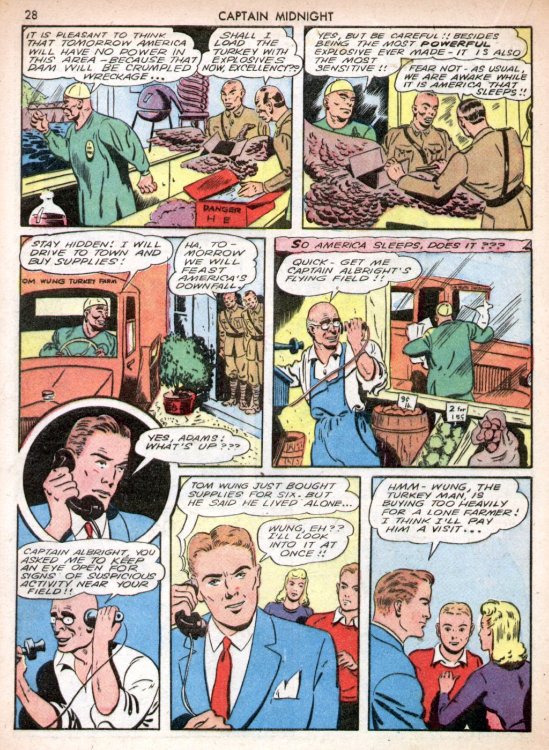 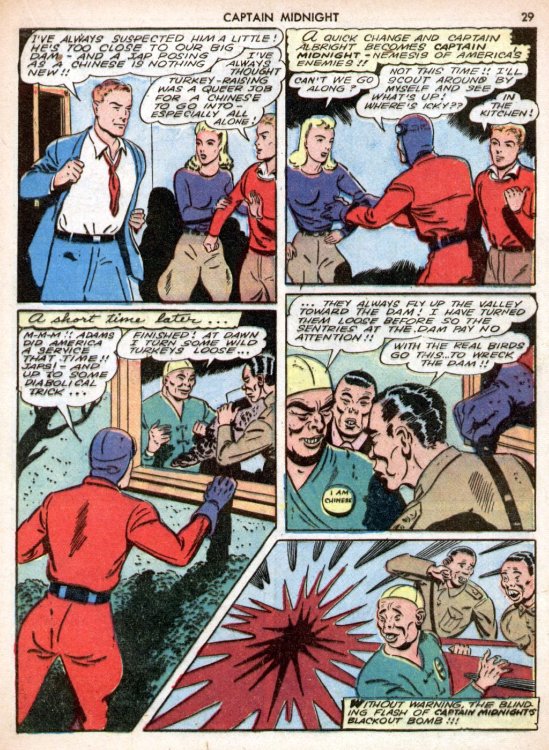 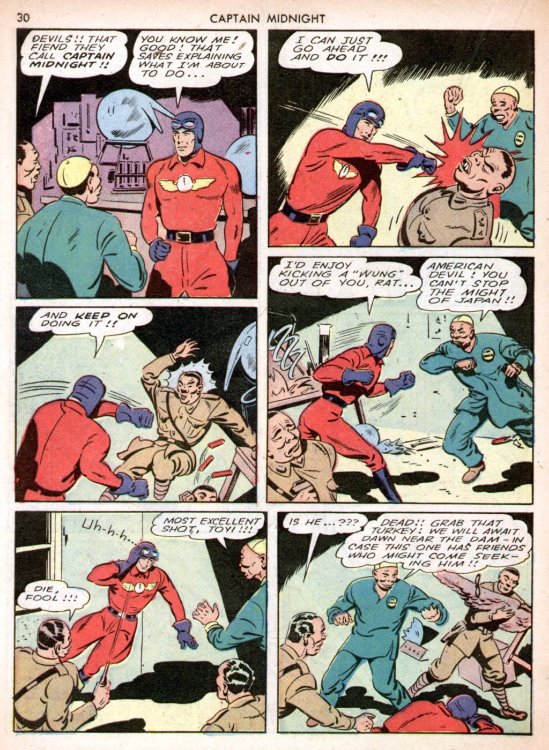 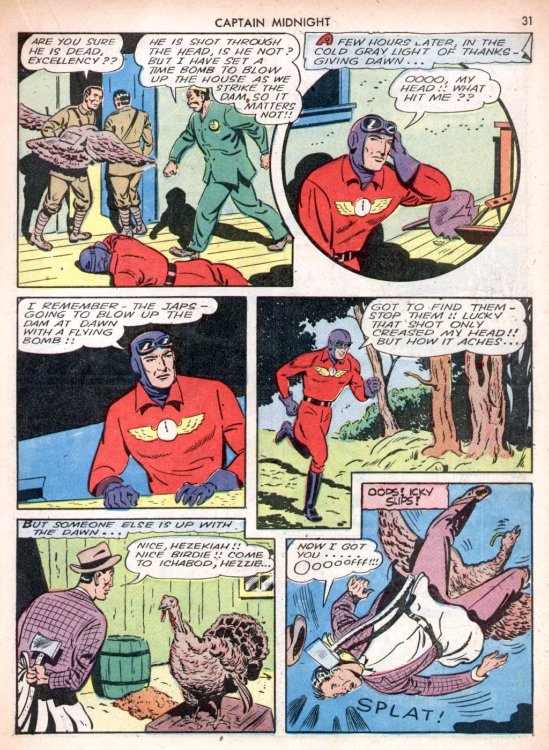 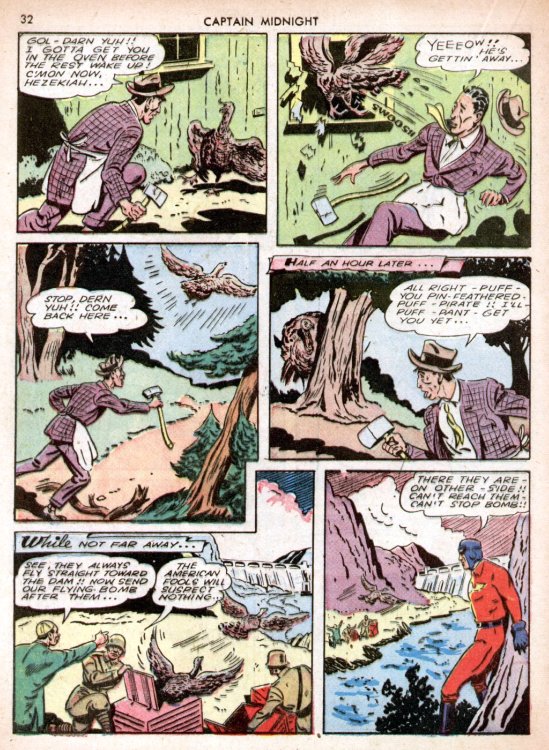 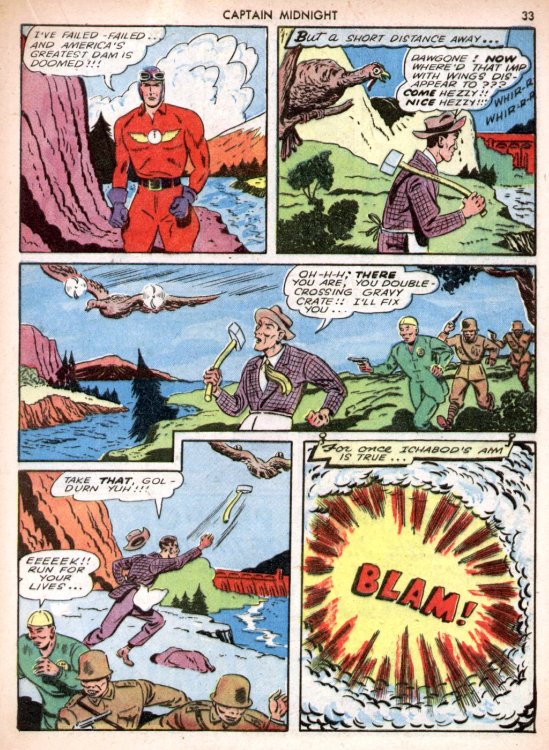 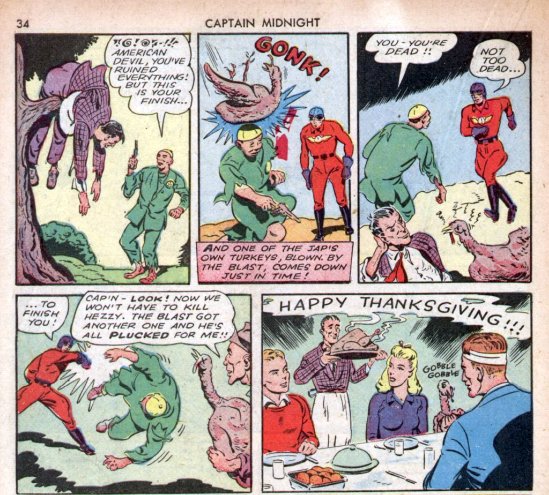 This tale from Fawcett's Captain Midnight #3 (1942) was written by Joe Millard and illustrated by Jack Binder.
In the 1940s-50s, one of the biggest pop cult phenomena was Captain Midnight!
Books

...He was EVERYWHERE!
Created for radio in 1938, the patriotic aviator ran the Secret Squadron, what we today would call a "black ops" team, supported by the government, but functioning outside of cumbersome legalities in dealing with spies, saboteurs, and (after the war) criminals!
Trivia note: the Secret Squadron originally used the code "SS" on their messages, decoders, and uniform patches, but changed it to "SQ" after World War II began to avoid reference to the notorious Nazi SS stormtroopers!
Captain Midnight

as the flagship radio show for Ovaltine, carrying on the tradition of issuing mail-in collectible premiums in return for Ovaltine labels and jar seals, taking it to far greater levels than any other radio series in history!
The phrase "Captain Midnight Decoder" became synonymous with mail-in premiums.
(In the short story from Jean Shepherd's In God We Trust; All Others Pay Cash! used as the basis for the classic Yuletide movie A Christmas Story, Ralphie receives a Captain Midnight Decoder, not a Little Orphan Annie one!)
The show ran Monday thru Friday in 15-minute segments, with ongoing storylines running for several months at a time, ending each episode with a cliffhanger and a coded message which required a Captain Midnight Decoder to translate.
A series of Big Little Books, a newspaper comic strip, and two different comic book series quickly followed, as well as a 15-chapter movie serial.
The radio show ended with a bang in 1949, as Cap's archenemy Ivan Shark (an evil aviator) was killed in the final episode!
Talk about "closure"!
Ovaltine revived Cap (but not Ivan Shark) in 1954 in a weekly TV series

with a heavier science fiction emphasis.
The Captain was now a civilian adventurer operating out of a mountaintop base in the SouthWest US, battling criminals and the occasional Commie spy.
Though only 39 episodes were produced, the show reran continuously in syndication until the mid-1960s.
Trivia: the syndicated version was retitled Jet Jackson: Flying Commando because Ovaltine owned the "Captain Midnight" trademark and didn't sponsor the reruns!
It became notorious for the fact that every time anyone (male, female or child) spoke the name "Captain Midnight", the new name "Jet Jackson" was dubbed over it by one middle-aged male voice actor! (Apparently, none of the original cast were available!)
Ovaltine continued to use "Captain Midnight" on advertising and occasional tie-in premiums until the late 1990s, when they finally abandoned the trademark.
Since then, he's only been around as part of old radio show collections on cd or mp3...until now!
Recently, both Dark Horse Comics and Moonstone Books revived Captain Midnight in NEW comics and prose stories!
Captain Midnight's already been part of our collection with six different vintage designs including five classic covers and his stylish logo on a variety of items including t-shirts, hoodies, mugs, messenger bags, and other tchochkes, for over a decade!
As unique graduation, birthday or Father's Day gifts for collectors of pop culture kitch, you can't go wrong with one of these klassy and kool kollectibles!
For something REALLY special, why not combine one of our Captain Midnight collectibles with one of Moonstone's new Captain Midnight books